what happened that night 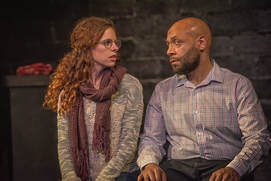 "One of the most inspiring parts of this heartening play is the relationship between Jenna (Tallie Gabriel) and Kevin (Russell Jordan); the latter treats the former with such trusting love, and it is absolutely reciprocated."

A TOUCH OF CINEMA 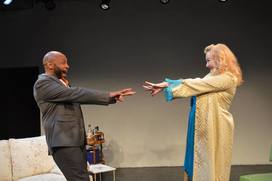 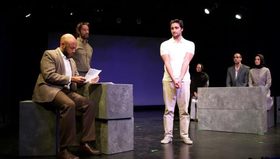 "[In HARAM IRAN,] Veteran actor Russell Jordan plays the judge (Mullah), who has to navigates his progressive sensibilities around his duty to Sharia law. Jordan brings a visceral intensity to such an interior conflict, and one could easily imagine a play solely about his character." 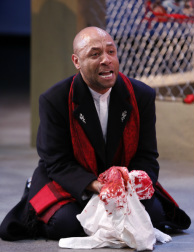 "Antigone's main strengths were Taubman's direction and the superb performances of Pëtra Denison as Antigone and Russell Jordan as Creon.

"This Antigone built relentlessly to its shattering conclusion. I have never been so emotionally involved in a Greek tragedy, including various big-deal Broadway versions with big-deal Broadway and West End stars." 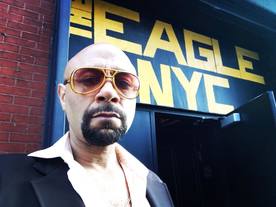 "[Donovan,] an undercover passerby[, is] played handsomely by Russell Jordan, ..." 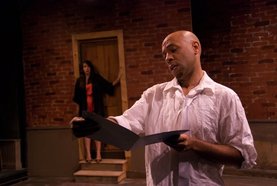 "Alberto Bonilla's "Big Black Mexican Woman" is a joy. Told with economy and comic brio, Bonillo delivers a neat package of welcome humor. Susan ([Teresa] Stephenson), a Jewish Long Island housewife ready for bed and sex, has been struck by lightning. She staggers on stage to be greeted by John, a bike-riding angel ([Russell] Jordan). Thus Susan encounters heaven, learning that she is not Jewish but actually African and Swedish; the records were mixed up in the 16th century. With John as her jolly guide, she finds that the play's title refers to Jesus. Both the attractive Stephenson and the talented Jordan play this original material to its zany hilt." 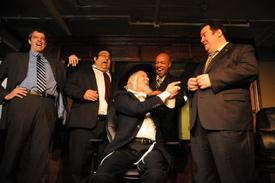 "The six-man cast is uniformly excellent, with Jeff Auer, Jonathan Marballi, Russell Jordan, and Bob Greenberg offering a quartet of contrasting yet conforming middle-management-executive types as A, B, C, and D, and Ethan Hova and Robert W. Smith providing exemplary takes on two different kinds of archetypal Jewish men." 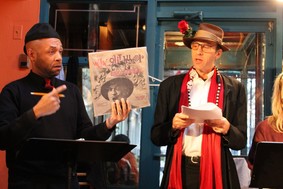 Russell Jordan, reading for the part of Orpheus threatened to steal the show with his carefully measured and subtly timed dialogue, bringing a weighty substance to the role of Orpheus that captured the feel of Hadean realms and a cosmic perspective on human frailties.

HELL AND HIGH WATER, OR LESSONS FOR WHEN THE SKY FALLS

("Hell and High Water, or Lessons for When the Sky Falls") depicts life before and after...hurricane (Katrina).  (Russell Jordan plays Restaurant Dave, half of) the humorous duo...who manage a restaurant in the French Quarter.  One of the play's most hilarious moments comes when (he and his fellow "refugees" have to deal with a) dizzying bureaucracy...(and) an endless series of qualifications...to receive government aid. (Russell completes the cast to form) the perfect ensemble."

"This was the dramatic highlight of the evening-a drunken Ken (Russell Jordan) is at a truck stop eating pie and coffee, when his ride arrives in the form of Junie (Sara Hatfield)...Terrific acting work from both Jordan and Hatfield."

"[Russell] Jordan, in a small but effective scene, brings the creepy and sadistic guard to life and once he leaves stage, his lingering effect stays with them till the end."